I am Cain Andrew.

I’m a Digital Artist from Germany and I have studied at two art academy’s in Berlin; Game Design, Art and Communication Design. As you can see, I’m a very versatile working kind of type for I am doing many different things, but my specialty lies in digital and conceptual art, just as script writing and the rest is rather based on a hobby.

I am highly interested in games and movies of all kinds and genres. Even though I have my favourites, I am very eclectic. Based on my love of art, storytelling and especially character design.

I work with different techniques, mostly digital with Photoshop or other paint programs. In my portfolio you can see a few examples here.

My specialty is Creature and Character Design in a realistic, comic and cartoon style.

Do you prefer to keep a poster or a print out from one of my artworks? Leave me an Email

The charm of the 30s

Thanks to a comic competition. I was able to fulfill a long-awaited desire: a comic book dedicated to Bonnie and Clyde, heavily based on biography, police reports and the charm of the 30′s. It is a short comic without any kind of verbal communication. The amazing thing is, my Screenplay includes 30 – 40 pages but I still had to cut short due to the lack of time because I’ve heard about the competition 3 weeks before the deadline.

The story of Bonnie and Clyde is a silent comic, shown from the perspective of Bonnie. Not much of what happened to Clyde is indicated here or shown, there are at least a few notes. You can read here

Near to every Scriptwriter would love me because I totally dedicate myself up to 100% every project I work on, if I do say so myself. Even Al Pacino goes as far as to react only if he’s adressed by his role-name on set and I guess I wouldn’t be different. So, I let myself influence on the music of the 20’s and 30’s and inspire myself everytime with new ideas. The given soundtrack of the award winning series Boardwalk Empire for example serves us some very intimidating music pieces for an intense feeling and a perfect atmosphere to sink into.

Funny thing that even the song „The Dumber They Come“ by Eddie Cantor has a fitting come back in the series. I totally recommend this series to everyone who has a thing for old gangster stories or for those who seek reference and information about that time.

Movies like „The Great Gatsby“ and „Chicago“ are also valuable references for that time. Personally, I kinda fell in love with the costumes and the setting.

Ideally, I’ve read a book about the stories of the FBI written by a New Yorker Journalist named Tim Weiner. It is a wonderful research on about 704 pages. In this book you learn just about everything; the origins of J. Edgar Hoover who espacially had great trouble with communists; the expansion and use of methods of the FBI and their fight against terrorism nowadays. His book which is based on unknown sources brightens the dark sides of the american history and puts the activities of the FBI in a p

olitic context. The author goes a long way and concentrates himself particularly on the history of the secret service. The research of the police work is really cut short, therefore you hear few things about criminal legends like Al Capone or Bonnie and Clyde.

An unlucky robbery lead Bonnie and Clyde to constantly fleeing through the whole middle west of the USA. Only the deployment of the National Security lead to their arrest. The fury they unleashed went so far that they got themselves a shooting command on their tail. As you can clearly see on the photo below that their car got shot precisely on the drivers seat from the side but not one shot went into the wheels to stop them. I don’t think they deserved to die like that. They never wanted to kill or hurt anybody seriously. They did all that as a necessity to find their own peace which was endangered by an unwanted murder in a robbery. Clyde swore to himself to never go back into jail (We’re talking about Texas here) so he escapes. Therefore the drama went on, Bonnie loved and followed him everywhere. Actually, it’s wrong to accuse Bonnie as a criminal. That clears up by following her background story without evading to Hollywoods tails. 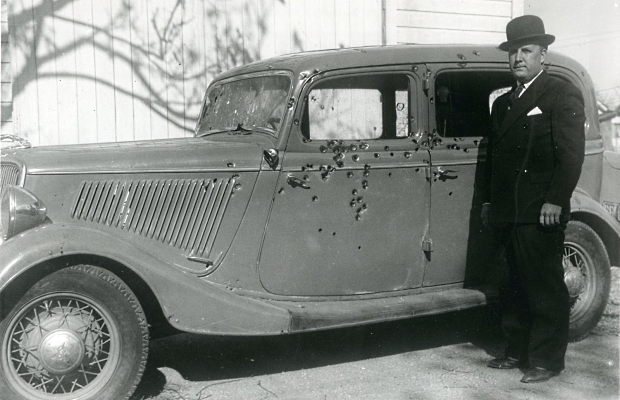 The completely perforated Ford V8 of theirs can be seen in a museum in Las Vegas. If I ever should come to make a road trip, it will definitely be next to Alcatraz and Mulberry Street (NY) on my plan and then I will report them all here of course.

Have fun with the comic or whatever you otherwise do.

Attention! You may see many strange creatures or cool characters. If you are able to recognize a character you should look into my fanart collection. Maybe you'll be fascinated by my technique. Feel free to look though my portfolio.

When life gets you down, do you wanna know what you’ve gotta do? Just keep swimming.